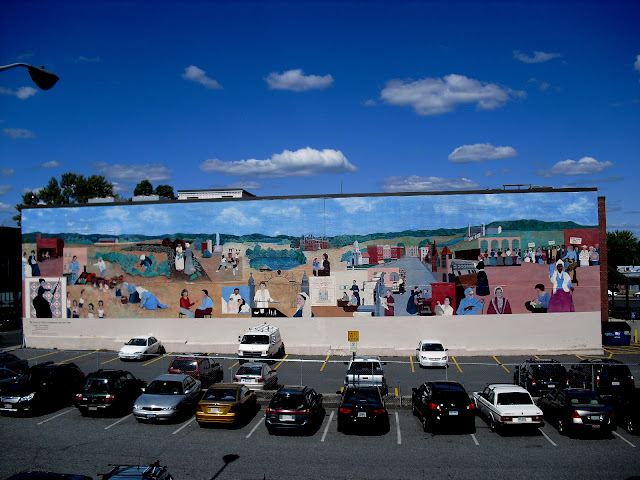 The Hestia Art Collective of five local artist created this huge mural in downtown Northampton. It depicts women of all walks of life who made a contribution to the history of Northampton. The figure on the left is Susanne Lathrop, a painter who along with her sisters opened a studio called the Northampton Salon in 1886. On the extreme right is Sojourner Truth an abolitionist and women's rights activist. In between are women from the past, both known and unknown.

The collective was named after the Greek goddess Hestia, the keeper of the eternal flame. The group included and included Linda Bond, Mariah Fee, Susan Pontious, Rochelle Schieff, and Wednesday
Sorokin.

tm01001
My two blogs - Photo-ops and Famous Gravesite Locations reflect my interest in travel and exploration that took me to all 50 states, much of Canada, Europe, the Caribbean, as well as some of Colombia, Panama, Costa Rica and Mexico. As I got older my outdoor activities shifted from hiking to orienteering to geocaching to waymarking. Famous Gravesite Locations is a subset of Photo-ops. You can find a grave using the GPS coordinates or use them to find the location of a gravesite on Google Earth.